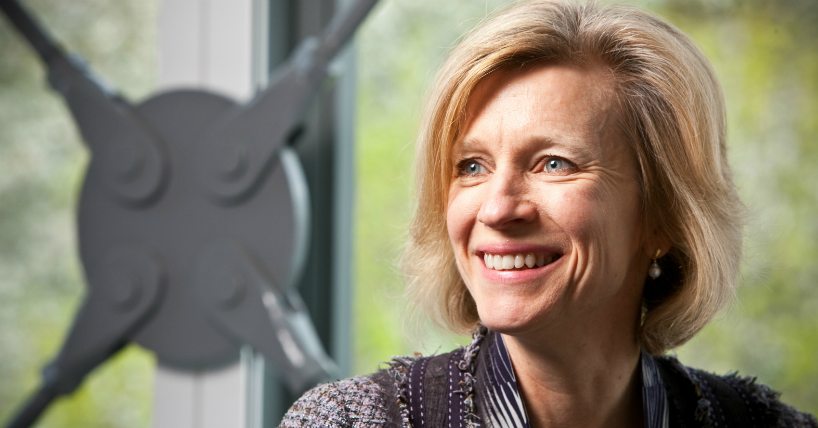 Anya Hurlbert is a Professor of Visual Neuroscience at the Newcastle University in the UK.
Her background is in physics, medicine and neuroscience, with her higher education and early career research experience taking place on both sides of the Atlantic. She graduated from Princeton University in 1980 with a BA in Physics, followed in 1981 by a Part III Diploma in Theoretical Physics and in 1982 an MA in Physiology from Cambridge University, where she held a Marshall Scholarship. In 1989, she received a PhD in Brain and Cognitive Sciences from MIT, where she studied with Tomaso Poggio and Peter Schiller, and in 1990, an MD from Harvard Medical School. She then held a Vision Research Fellowship at Oxford University in Andrew Parker’s lab, before joining Physiological Sciences in the Faculty of Medical Sciences at Newcastle University in 1991 as a lecturer.

Having moved from Physiological Sciences to Psychology, she became acting Head of the Division of Psychology, Brain and Behaviour (Faculty of Science, Agriculture and Engineering) in 2003, and interim Head in 2007, helping to create the new School of Psychology in the Faculty of Medical Sciences. In 2004, she co-founded the Institute of Neuroscience with the late Professor Colin Ingram, and was co-Director of the Institute until 2014. In 2012, they established the Centre for Translational Systems Neuroscience with a Capital Award from the Wellcome Trust.

Abstract: The Colour of Paintings in a Contemporary Light

People tend to think of colour as an intrinsic property of objects – red apples, yellow bananas, green grass – not as the subjective, variable, perceptual phenomenon which it is. Paradoxically, the variability of colour arises partly from colour constancy, a stabilising mechanism by which the brain compensates for changes in the illumination spectra on objects. Although colour constancy is universal, the weightings people give to different components of the mechanism, and hence the overall strength of constancy, vary between individuals. As a result, striking differences in reported colour may emerge when the illumination spectrum changes or is ambiguous – as in #thedress.

Here I will discuss the role that colour constancy plays in people’s perception of paintings, both in terms of the artist’s intent in capturing the constant colour of objects (as in Moroni’s Portrait of a Lady) or the effects of changing illumination spectrum (as in Monet’s series paintings), and in terms of the illumination spectrum under which people view the paintings. For the latter, I will review experiments in which people view artworks illuminated by dynamically changing light from a bank of tuneable LED light sources, demonstrating, as in #thedress, that the colours people see in paintings vary widely. These experiments also highlight the fact that the colours we see, and the constancy with which we see them, must evolve along with the technology that enables new and ever-changing illuminations.