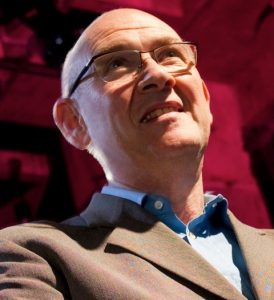 Jeffrey Shaw has been a leading figure in new media art since its emergence from the performance, expanded cinema and installation paradigms of the 1960s to its present day technology-informed and virtualized forms. In a prolific oeuvre of widely exhibited and critically acclaimed works he has pioneered and set benchmarks for the creative use of digital media in the fields of virtual and augmented reality, immersive visualization environments, navigable cinematic systems and interactive narrative. His signature works include Corpocinema (1969), Viewpoint (1975), Heavens Gate (1986), Legible City (1989), The Virtual Museum (1991), EVE (1993), Golden Calf (1995), conFIGURING the CAVE (1997), The Web of Life (2000), PLACE-Hampi (2006), T_Visionarium (2008), Pure Land: Inside the Mogao Grottoes at Dunhuang (2012), and Fall Again, Fall Better (2014). Shaw was co-founder of the Eventstructure Research Group in Amsterdam (1969-1979), the founding director of the ZKM Institute for Visual Media Karlsruhe (1991-2002), and was appointed Professor of Media Art at the Staatlichen Hochschule für Gestaltung, Karlsruhe in 1993. In 2003 he was awarded an Australian Research Council Federation Fellowship to found and direct the UNSW iCinema Centre for Interactive Cinema Research Since 2009 Shaw has been Chair Professor of Media Art and Dean of the School of Creative Media at City University in Hong Kong where he is also Director of the Applied Laboratory for Interactive Visualisation and Embodiment. In 2014 he was appointed Visiting Professor at both the Central Academy of Art Beijing (CAFA) and the Institute of Global Health Innovation, Imperial College, London. In 2015 Shaw was awarded the Ars Electronica Golden Nica for Visionary Pioneer of Media Art, and published his Compendium 1966-2015. (www.jeffreyshawcompendium.com)

Abstract: Future Media – the Art to Come (and where it came from)

The contemporary renews itself by giving emblematic form to questions, for example, about the body of viewer and its engagement with an artwork, about the conjunction between the virtual and the real, about the conditions of prosthetic representation and augmented perception, about context and the spaces and places of intervention and cultural rehabilitation, about artistic singularity and the contingency of authorship, about the past in the present and the future of the past, about technological epiphany and egotism, about art’s corporeality as an imaginary and quixotic construct, about narrative after story-telling, and about the exigency of art’s perennial re-invention.