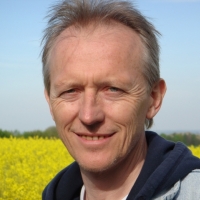 Karl Gegenfurtner studied Psychology at Regensburg University. Subsequently he obtained a Ph.D. degree from New York University, where he also spent his first PostDoc. In 1993 he moved to the Max-Planck-Institute for biological cybernetics in Tübingen, where he obtained his Habilitation in 1998 and a Heisenberg-Fellowship in the same year. In 2000 he moved to the University of Magdeburg and in 2001 to Giessen University, where he since then holds a full professorship for Psychology. The emphasis of Karl Gegenfurtner’s research is on information processing in the visual system. Specifically, he is concerned with the relationship between low level sensory processes, higher level visual cognition, and sensorimotor integration.
Karl Gegenfurtner is the head of the DFG Collaborative Research Center TRR 135 on the “Cardinal mechanisms of perception”. He was elected into the National Academy of Science Leopoldina in 2015.

Abstract: Mechanism of colour perception: From cones to cognition via constancy

The first stages of color vision are well understood. The spectral absorption functions of the cones in the retina have been standardized and even the genetic basis of individual variability is known. The second-stage, cone-opponent circuits of bipolar and ganglion cells has been characterized at the computational, anatomical and functional levels. However, the contributions color makes to high level vision and cognition are less well established. I will argue that there are mainly two functions of color in higher level vision. First, color makes a tremendous contribution to segmenting objects from their background, leading to quicker recognition of scenes and objects. Second, color contributes to visual memory, leading to better recall of scenes and objects, a function that is crucially mediated by color constancy.
Diese Website benutzt Cookies. Mit einem Klick auf den Button "OK" bestätigst du, dass du damit einverstanden bist. Weitere Informationen erhältst du mit Klick auf den Button "Datenschutzerklärung".OKDatenschutzerklärung