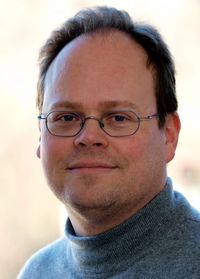 Thomas Euler studied Biology at the University of Mainz, where he obtained a PhD degree (Dr. rer. nat.) in 1996. He conducted both his diploma and PhD work at the Max-Planck Institute for Brain Research in Frankfurt/Main. In 1997 he went to Boston, MA, for his first postdoc at the Massachusetts General Hospital and the Harvard Medical School. In 2000, he moved back to Germany and started as a project leader at the Department of Biomedical Optics of the Max-Planck Institute for Medical Research in Heidelberg. In 2006, he became a research group leader at the Department of Biomedical Optics. Between 2007 and 2009, he was offered professorships in Erlangen and Heidelberg, before moving to the Centre for Integrative Neuroscience of the University of Tübingen, where he since holds a full professorship for Ophthalmic Research at the Centre for Ophthalmology. Since 2015, he is coordinating the EC-funded training network “ITN switchBoard”.
Thomas Euler’s research focus is the functional organization of retinal microcircuits, aimed at a better understanding of the underlying computational principles. Furthermore, he is interested in how microcircuits change during retinal degeneration.

Abstract: Seeing with the Eyes of Mice

Seeing with the Eyes of Mice. Mice are not the first animals that come to mind when thinking of colour vision. Mice are certainly no colour specialists but like most mammals, mice feature two spectral types of cone opsins, a medium (M, "green") and a short (S, "UV/blue") wavelength sensitive opsin. Mice are, thus, dichromates - as confirmed by behavioural experiments. In addition, the mouse retina displays an odd specialization that one would expect to hamper colour vision at least in the ventral retina: a dorso-ventral gradient of cone opsin co-expression that renders ventral M-cones UV/blue-sensitive. In my talk, I will review the chromatic circuits in the mouse retina and discuss what functional role the opsin gradient might have in mouse vision.